So I’m coming to a strange point in my life. I suddenly realize that over the course of a couple years I have become very unwell. Slowly over time my health has deteriorated. Luckily, we have modern medicine to identify the problem. It took a year and a half, and 6 doctors. Once the problem was identified, it is taking a relatively short time to fix. Hallelujah!

So now I am coming to a new beginning. I want to be well, truly well, physically, mentally, emotionally, and spiritually. In order to achieve that I need to begin to actively making goals. I’m going to try and record those here.

I am excited to enter this time of change. I don’t believe it will all be fun, but it is necessary.

How is it that all three boys can get sick with different things within the first two weeks back to school? I can see one or maybe two, but all three? Cough, cough, hack, hack…

So that new cough elixir was tried. OK, only one boy tried it. He didn’t like it. I have to find one without the cayenne. The other teenager, my picky one, smelled it and told me I lost my mind.

Thank goodness for grandmas. It is incredibly difficult to miss school, but especially in the first weeks when you are trying to teach routines and procedures. There is so much pressure right now on teachers. Individually we are appreciated, but as a group not so much.

Back to sick kids–I think I need to finally take the third one to the doctor. He keeps telling me that he feels better, but I have heard him cough continuously for the last hour. That will only be two hours out of my day. 😦

My Pinterest morning project was a very simple, natural cough syrup.  I will let you know how effective we find it.

Today I need to buy school supplies.  Yes, school begins tomorrow.  Where did my summer go?  I envisioned calm relaxed days at the beach.  My house was going to get clean.  I was going to be super mom….

Um, yeah…not so much…

Nervous.  That is what it is.  I’m nervous.  It is one thing to direct a school play or church play, but directing at the Children’s Theatre.  That makes me nervous…

Life is about challenging yourself though.  I have already assembled a great support team.  Choreography, vocal, and costumes!

Now to read the script…

My life is a mess, literally.  I thought I wasn’t able to keep up with housework, schoolwork (the cleaning up part), because of lack of time.  Well now I know it was lack of energy.

It is still daunting to look around my house and realize how much I have to do.  Summer is my organizing time and this year is no exception.  I will be creating my lists and going into summer head first.

I’m a little excited that this summer is longer than most.  We had no snow days this year.  What that really means is that I will make a list that is too long.  🙂  I guess one of my summer goals should be to be realistic.

Last week I was diagnosed with severe anemia.  This is going to sound strange, but I hadn’t realized how much my life had changed.  I knew that I was having difficulty getting things done, but thought it was just all the time being a mom to toddler was a taking.

Now I see that is because everything was taking me four times longer to do it.  Feeling better every day.

When my family is asleep, I watch Toddlers and Tiara’s. I live with 4 guys so they enjoy making fun of me when I get to “girlie.”  But in all honesty this is just one of those weird things that you watch, because you don’t quite get it.

OK, it’s the glitz pageants that I don’t understand.  I think it would be kind of fun to do the natural pageants, but the glitz?  Flippers, makeup, and the money….oy!

I am a 44-year-old mother of two teenagers, 14 and 15, and a 2 1/2-year-old.  People have commented about my “accident.”  (By the way this cracks me up when they say it to me(white) and my husband (white) while looking at my obviously biracial son.)  K was not an accident. K was a wondrous gift.

A little over three years ago, my cousin committed suicide.  His wife of 20 years became pregnant by someone else 3 or 4 months later.  For reasons that I’m not going into, the family was pretty sure the baby would be taken into foster care.  We inquired about taking the  baby when he was born.

His birth mother made decisions that didn’t include our side of the family, after all we are “blood” to this baby.  Now his brother and sister are my 2nd cousins. I never got to meet the baby.  He was with mom for a while.  Then he was placed in foster care.  Family rumors had him being adopted by a cousin of his birth father.

Then on a Monday I got a phone call from another cousin, “Are you guys still interested in adopting the baby?  He MIGHT need another home”  The baby is now 9 months old and has lived in 3 homes.  Absolutely. My husband and I spoke a bit with his Social Workers.  It sound really iffy.  They didn’t want to move him again if they didn’t have to move him.  I totally understood.

The next Monday I got another phone call asking again if we were really committed to taking him. We decided we better tell the older boys that this might happen.  Like us they considered this baby that we have never met, part of our extended family.  They thought it was  a cool idea.  I stressed this probably wouldn’t happen, as they didn’t want to transition him again to a new home if they didn’t have to do that. 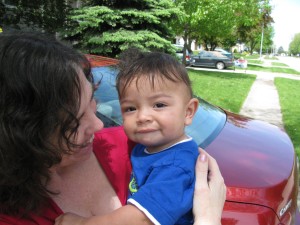 That first meeting in the driveway.

That Friday morning I got a call at 10:30.  I’m at school teaching.  An hour later I am in my driveway holding this sweet little boy and falling in love.  He seemed like he had been there from the beginning.  He bonded very quickly, and is loved beyond measure.

Now almost 2 years later I am so grateful that my cousin(not his birth mom) remembered that we wanted him, and told the Social Workers about us.  There were other family members that would have taken him, but I really feel that it was God’s plan to have him here.

In less than two weeks our lives were turned upside down and inside out.  I wouldn’t have it any other way.